I've often wondered why various questionnaires asking about race give me the option to call myself Caucasian. The whole thing is quite suspect today, but this particular concept of a Caucasian race can be traced back to the early 1800s when a German (sic!) scientist Johann Friedrich Blumenbach named it after the peoples of the Caucasus region, stretching from Russia south to Iran. Blumenbach and others in his day were big into measuring skulls (phrenology). So, based on his skull-measuring research, he divided us humans into five races:


Blumenbach's work had big time influence on ideas about race in the 19th century. How then did the Nazis in the early part of the 20th century come up with the term Aryan and the idea that the Aryan race was destined by the gods to rule the world?

Aryan is a word derived from the Indo-Aryan Vedic Sanskrit and Iranian Avestan terms meaning "noble." During the 19th century an idea spread that people from India and Iran were the earliest Europeans. This theory was used by some British imperialists to justify British control of India. After all, they said, the founders of Indian culture were of the same race as the Anglo-Saxon invaders who established the British Raj.

Dr. N.S. Rajaram explodes that whole theory in an interesting article, "Aryan Invasion—History or Politics." He traces the idea of an Aryan race to the German scholar Friedrich Max Muller (1823-1900). Muller settled in Oxford from 1848 to the end of his life. He spoke not only of a definite Aryan language, but also of a corresponding 'Aryan race.'

The idea was picked up by the Nazis. As I said, it had been floating around Europe all through the latter part of the 19th century and into the first part of the 20th. Many Germans wanted to be free from the Jewish heritage they linked to the Bible and the Christian church. So they insisted that the true roots of Western culture were to be found in India and the mountains of Asia (Caucasus) rather than in the ancient Near East. This pseudo science supported their antisemitic prejudices.

Once again link these ideas to HPB, Madame H.P. Blavatsky and her book The Secret Doctrine. Christopher Hale gives us an interesting summary of HPB's teachings in his introduction to Himmler's Crusade—The Nazi Expedition to Find the Origins of the Aryan Race.

According to HPB the whole thing started several million years ago when some spiritual essences called the Self-born inhabited the Imperishable Sacred Land. However, their imperishable kingdom sank beneath the ocean. Next came the Hyperboreans. After their disappearance the Lemurians appeared on a vast continent in the Pacific eighteen million years ago.


This continent was also destroyed in a cataclysm of fire and flood. About 1,850,000 years ago a fourth race made up of giants, appeared on the fabled continent of Atlantis. They discovered electrical power, powered flight and built enormous temples and pyramids. But, alas, their continent also sank into the ocean. 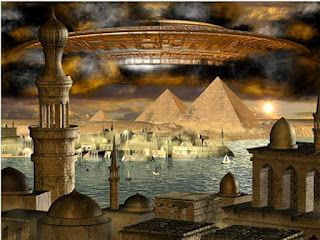 But all was not lost. An elite priesthood escaped to the Gobi Desert and then into the Himalayas and the lost Tibetan kingdom of Shambhala. These surviving Atlanteans passed on their wisdom to the Aryans, who began to spread south and west across the globe, producing the great, white Anglo-Saxons.

So, look out. Here comes the Master Race. More on this another time.
Posted by Dr. Alvin Franzmeier at 1:20 PM