New Teachings and the Nazis

Yesterday I wrote about Madame H.P. Blavatsky's Secret Doctrine, with her revelations about the fabled kingdoms of Lemuria, Atlantis and Shambhala. It all reminds me of some Bible verses.

We all are fascinated by new teachings, especially when they confirm convictions we already have. Lemuria, Atlantis and Shambhala are the stuff of science fiction and fantasy. Consider how they live on in our imaginations, in literature and in the media to the present moment. Here's but a few examples. Of course, don't believe everything you read, simply because I quote it.

Stargate Atlantis - "Several million years ago, in a beautiful alien city in Antarctica, a man and a woman in silver clothing — two of the Ancients who created the Stargates — look out a window sadly as the city rises out of the encroaching ice and flies away to the stars, leaving behind only a small outpost.

"Present day: At the Ancients' abandoned outpost (discovered in the Stargate SG-1 episode "Lost City," Part 2), Dr. Elizabeth Weir, head of the Stargate Atlantis project, rides an elevator with Lt. Aiden Ford down a deep shaft bored in the ice. Reaching the research facility below, they find Dr. Rodney McKay and Dr. Carson Beckett arguing over the fact that Beckett is afraid to sit in the Ancient chair that controls the most powerful weapons known to humankind, etc."
The Legend of Lemuria - "Mid-19th Century paleontologists coined the term "Lemuria" to describe a hypothetical continent, bridging the Indian Ocean, which would have explained the migration of lemurs from Madagascar to India. Lemuria was a continent which submerged and was no longer to be seen. By the late 19th Century occult theories had developed, mostly through the theosophists, that the people of this lost continent of Lemuria were highly advanced beings. The location of the folklore 'Lemuria' changed over time to include much of the Pacific Ocean."
And again concerning Lemuria or MU: "According to author James Churchward, MU was about 5,000 miles long and 3,000 miles wide, a beautiful tropical paradise like the Garden of Eden. He claims there were 64 million people who died in the sinking, and that it dated back over 50,000 years. The Pacific Islands are the remaining mountain peaks of the lost continent. Precise detailed maps of the lost continent of Mu and Atlantis were found on stone tablets from Pre-Inca Ica, Peru, by Dr. Javier Cabrera, engraved in stone and photographed by Robbert Charroux.
"United Nations diplomat Farida Iskoviet, assistant to United Nations President Adam Malik, came to Maui in 1972 and researched Lemurian ruins and history and concluded that they were real."


By the way, James Churchward was a British born occult writer who died in 1936. He claimed to have obtained his information from an Indian priest who taught him to read an ancient dead language spoken by only three people in India. I cannot discover anything about Farida Iskoviet—if he existed. Adam Malik of Indonesia, on the other hand, was UN President in 1970. 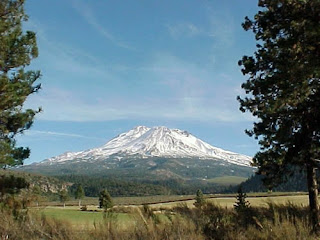 And then there's the connection with Mount Shasta in northern California - Aurelia Louise Jones has some kind of newly channeled information she feels we all need to know. She writes, in part,


"A while ago, I was asked to describe, as well as I could, some of the reasons the people of the Inner Earth, or the various civilizations living in the hundreds of underground cities have chosen to live in this manner, and still choose it to this day.


"Over twelve thousand years ago, when the continent of Lemuria sank beneath the waves of the Pacific Ocean, about 25,000 Lemurians, part of those who escaped and survived, went to live underground, underneath Mt. Shasta, to the city they named Telos. The project of building this underground city was started several centuries prior to the sinking of the continent. The Lemurians and the Atlanteans knew for a few thousands of years ahead that their continents were doomed to eventually sink, and they painfully prepared for it. Telos was prepared to save 200,000 people but only 25,000 actually made it on time to the underground city before the land sank underneath the waves."


Apparently there are some highly evolved Lemurians of the fourth and fifth dimension consciousness living in subterranean cities beneath Mt. Shasta. They have much to teach us idiotic surface dwellers.


There you have it—new information. And you don't believe a word of it, do you? Or do you? Well, the Nazis did back when they were getting their movement going in the early 1930s.

Posted by Dr. Alvin Franzmeier at 8:00 AM