Jesus' Appearance In The Revelation of John

What literally does Jesus look like? There are hundreds of artistic guesses. No one knows, because no one made a drawing of Him while He walked this earth for about 33 years. The best we can do is try to imagine what a 30-some year-old man might have looked like in first century Galilee / Judea. Here is a site that claims to document some "face to face" encounters and visitations with Jesus Christ @ Divine Revelations. Below are some free typical examples posted in dreamstime.com. 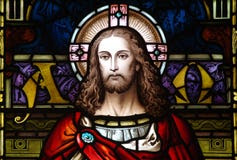 None of these are what John says he saw. Listen and imagine for yourself:

"Write what you see in a book and send it to the seven churches, to Ephesus and to Smyrna and to Pergamum and to Thyatira and to Sardis and to Philadelphia and to Laodicea." Then I turned to see the voice that was speaking to me, and on turning I saw seven golden lampstands, and in the midst of the lampstands one like a son of man, clothed with a long robe and with a golden sash around his chest. The hairs of his head were white, like white wool, like snow. His eyes were like a flame of fire, his feet were like burnished bronze, refined in a furnace, and his voice was like the roar of many waters.  - Rev 1:11-15 ESV

Did our Lord mean to give us a literal vision of Himself, because none is recorded elsewhere in the Bible? By no means. This description, like all of the visions in The Revelation, is symbolic. It is a picture with multiple meanings that point far beyond the mere picture itself. Let's take a look and ask what Jesus is saying both to John and to us in this revelatory symbol of Himself. Then consider what it means for your own life.

What did John hear and see? He saw:


one like a son of man - Certainly Jesus fully intends for us to remember that He is and always will be human. He is Immanuel, God with us in human form. Volume after volume has appeared across the centuries to emphasize that the risen Christ was and ever will remain not only true God, but also true man, as the Christian creeds emphasize. As our Brother He understands us since He was tempted in every way even as we are (Heb 2:17-18; 4:15).

wearing a long robe with a golden sash - Revelation was written in code. That is, it is written with reference to the Old Testament. The image here is that of a Jewish high priest with a partly golden sash around his waist (Ex. 28:2-8; 39:5). The prophet Daniel shares this same image as he writes what he saw when the Son of Man appeared to him (Dan. 7:9-13; 10:5-6). In John's revelation Jesus portrays Himself as the High Priest who made the final sacrifice for all mankind (Heb 7:15-16), He is the ancient of days, the eternal God, the risen ruler of kings on earth, the one coming with the clouds to judge all the tribes of the earth (Rev. 1:5-8).

his eyes like a flame of fire - they penetrate past our empty pretence, into our hearts. Jesus is the all-knowing One. None can hide fro His gaze. This then is a warning to all who will stand before Him. He is the all-consuming fire of those who resist Him (Ex. 24:17; Deut. 4:23-24; 9:3).

his feet like burnished bronze, refined in a furnace - The LORD appeared to the prophets in a body shining like bright bronze and the mineral beryl. None dare resist this powerful One (Eze. 40:3; Dan. 10:6).

his voice sounding like the roar of many waters. The waters rose in the days of the flood that destroyed all but Noah's family. Now the same Lord is coming in judgment, with power mightier than the waves of the sea (Psalm 93:4; Isa. 17:13; Ezek. 43:2).

his face shining like the sun in full strength. The sun does destroy  those unprotected (Psalm 121:6; Isa. 49:10. But the Sun shines with healing upon those who are finally set free (Mal. 4:2).

Recall that John knew Jesus personally. He was one of the inner-circle of three who were with Him on the mount of transfiguration (Matt. 17:1-2). In this revelation Jesus appears in much the same way, in His majesty, power and glory. This is the message John is to send through these symbols that serve both as a warning and as Good News of comfort to the seven churches—and to all members of the church.

Next time we shall consider the two-edged sword that came from the mouth of this mighty Son of Man and what that means to us who put our faith and hope in Him.
Posted by Dr. Alvin Franzmeier at 12:10 PM