Immortality Through Science And Technology

We who honor historical Christian worship practices have just completed our celebration of Easter and Christ's resurrection from the dead. Last Sunday we celebrated the festival of Pentecost and the outpouring of the Holy Spirit. Empowered by that Spirit, we believe we are sent out into the world with the message that Christ offered his perfect life for all mankind and thereby rescued us from the power of sin and death. He is risen and we who believe in him already have his life within us, a life that will never end. When Christ returns He will also grant us immortal bodies in a renewed creation (cf. Romans 8:9-34; 1 Corinthians 15:12-58). However, before that happens we must accept the hard fact that we will all die. Even though we already share his eternal life, our bodies, corrupted by sin, remain under the curse of death (John 11:23-27). There is no alternative.

However—and this fascinates me—a sizable group of humanistic-oriented scientists believe there is indeed an alternative. They need no Christ nor good news about some distant resurrection and renewal. They are working to bring mankind immortality through science and technology now! I want to acquaint you in more detail with the building of this new tower of Babel (Genesis 11:1-9), with what they assert. I hinted at this in one of my recent blogs. The basic claim:


How should a Christian respond? For today let's consider what these scientists are saying. 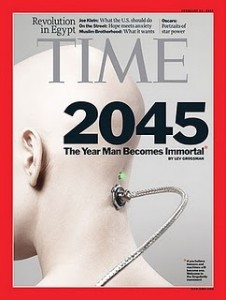 The main proponent for the 2045 singularity event is Ray Kurzweil. Time, in a February 10, 2011 article, says Kurzweil "believes that we're approaching a moment when computers will become intelligent, and not just intelligent but more intelligent than humans. When that happens, humanity—our bodies, our minds, our civilization—will be completely and irreversibly transformed. He believes that this moment is not only inevitable but imminent. According to his calculations, the end of human civilization as we know it is about 35 years away."
The Immortality Institute claims that science is already increasing human longevity and ultimately will discover the causes of biological death and eliminate them. They argue for more funding for longevity research since slowing down aging will stop many diseases before they occur. They believe the aging process is modifiable, that it can be decelerated. In turn that discovery will dramatically delay and lower the incidence of chronic disease and achieve a much longer health-span for us all. Could it ultimately even bring human immortality? Yes, yes, yes!
Fight Aging! insists, "We stand on the verge of a revolution in medicine: understanding, treating, and ultimately preventing the causes of degenerative aging." One posted article on that site quotes Ray Kurzweil and Dr. Terry Grossman in  Fantastic Voyage: Live Long Enough to Live Forever. Kurzweil and Grossman conclude:

"In our modern era of abundance, all generations can contribute to the ongoing expansion of human knowledge. Our life expectancy will be in the region on 5,000 years ... by the year 2100. By following the three bridges described in Fantastic Voyage, you should be able to reach the year 2100, and then, according to Aubrey de Grey (Strategies for Engineered Negligible Senescence), extend your longevity indefinitely" (italics added).

Do your own research. The internet is packed with sites and related claims. How naive and out of touch are we Christians who claim that only Christ can and will conquer death. Stay tuned. We may have finally discovered Ponce deLeon's mythical fountain of youth!
Posted by Dr. Alvin Franzmeier at 6:37 PM